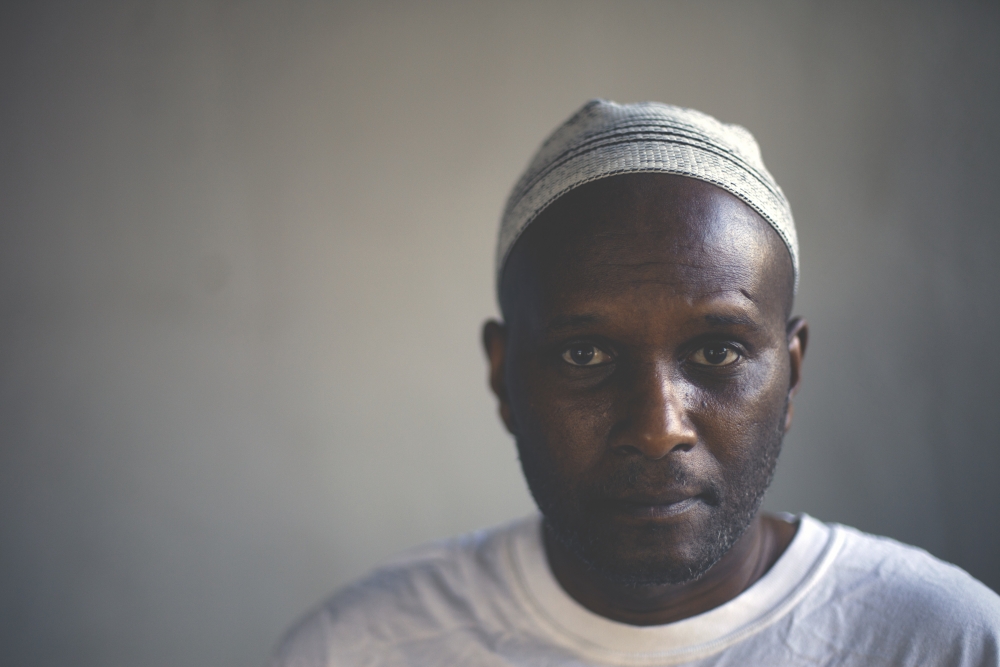 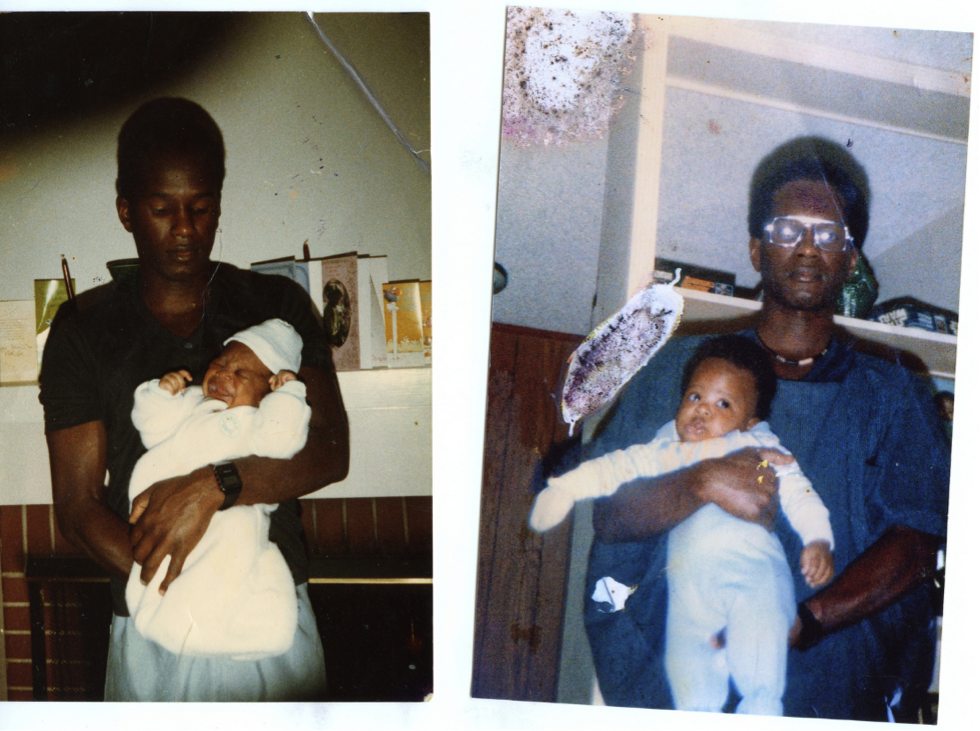 As I shared in a short essay published in the Revealer in 2017, "The first questions I had for my dad had nothing to do with Islam itself, but was, instead, about why he decided to become Muslim, how his family felt, and if he thought he made the right decision. 'I felt like I was at a buffet,' my father recounted. 'I was going from religious community to religious community, getting a bit of this and a bit of that, but never really feeling full.'"

The Mapping the Spirit project began with me interviewing my father over the past several years about his 1982 conversion to Islam at Masjidul Warithdeen on 47th and Bond in Oakland, CA.  In the process of interviewing him, I came across his archive loosely organized in a burgundy binder. Written on the back of his pharmaceutical dosage charts from technician training were reminders on how to pray as well as notes on khutbahs, or religious speeches he delivered at our local mosque. His notes came in a variety of forms: handwritten pages, collages formed from a range of sources further annotated with typed texts and handwritten text, and photocopies of book pages, articles, and mosque newsletters.  In addition to this binder, my father allowed me to have some of the early books he read at the beginning of his conversion in the early 1980s through the 1990s.

In this field note dispatch, I want to share some of these items. 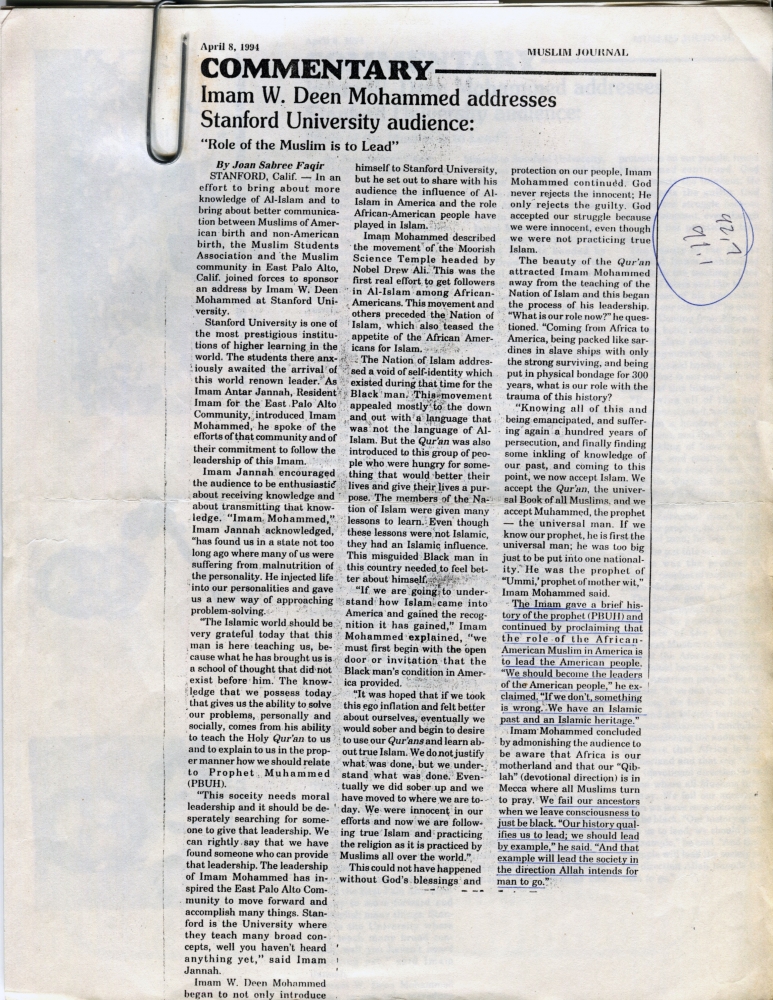 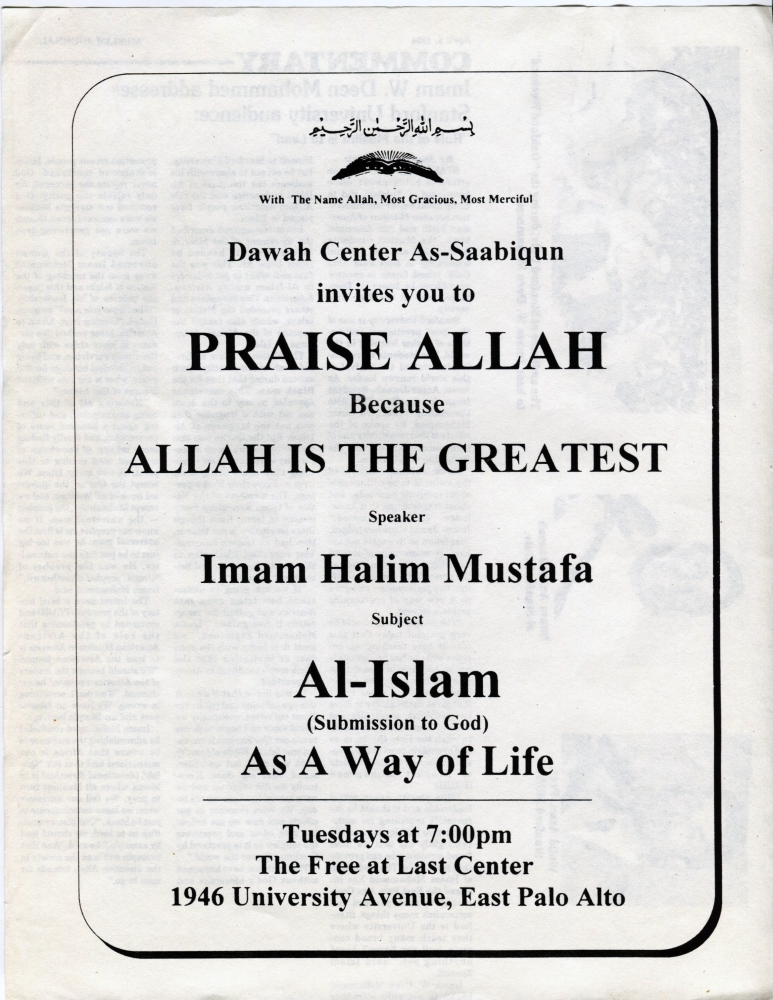 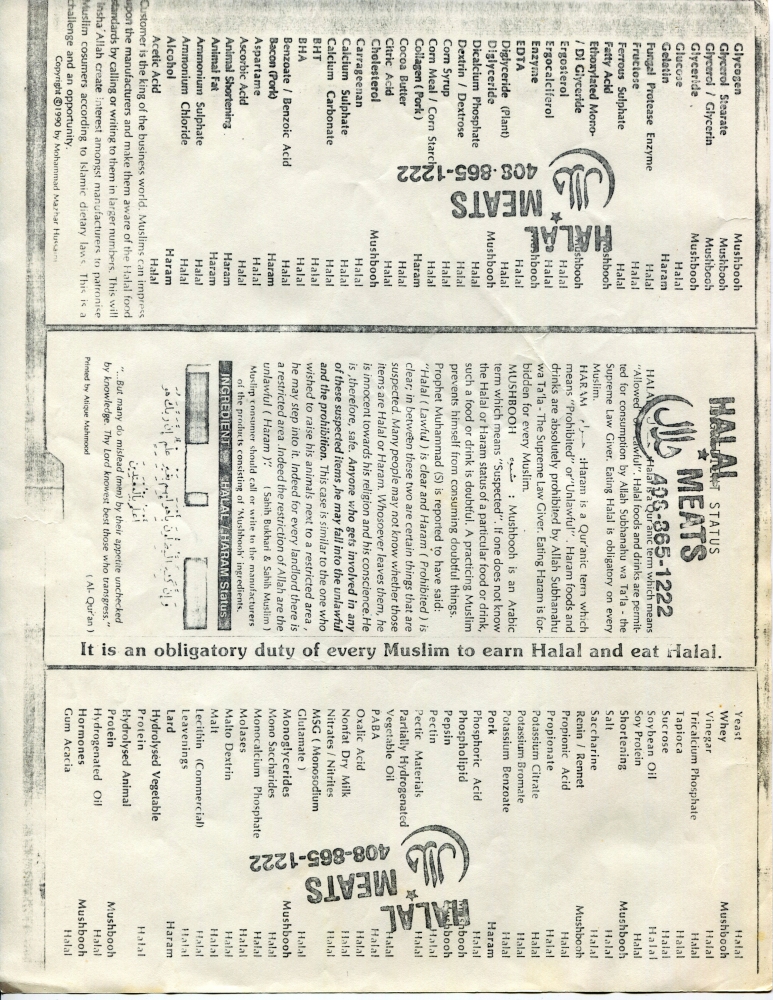 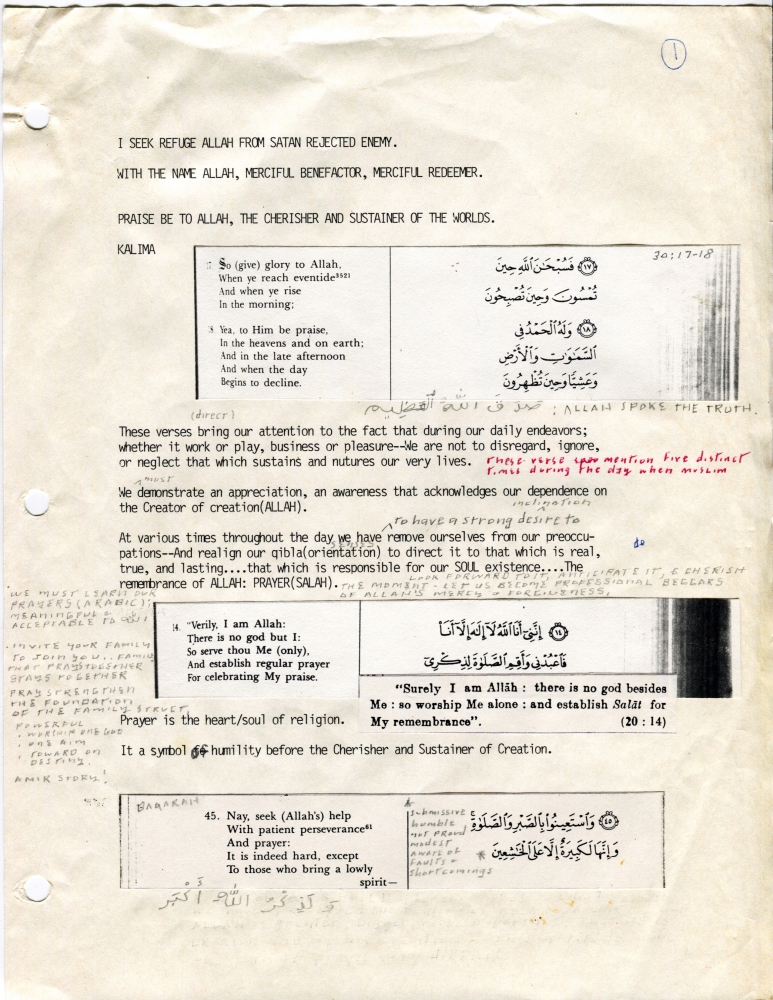 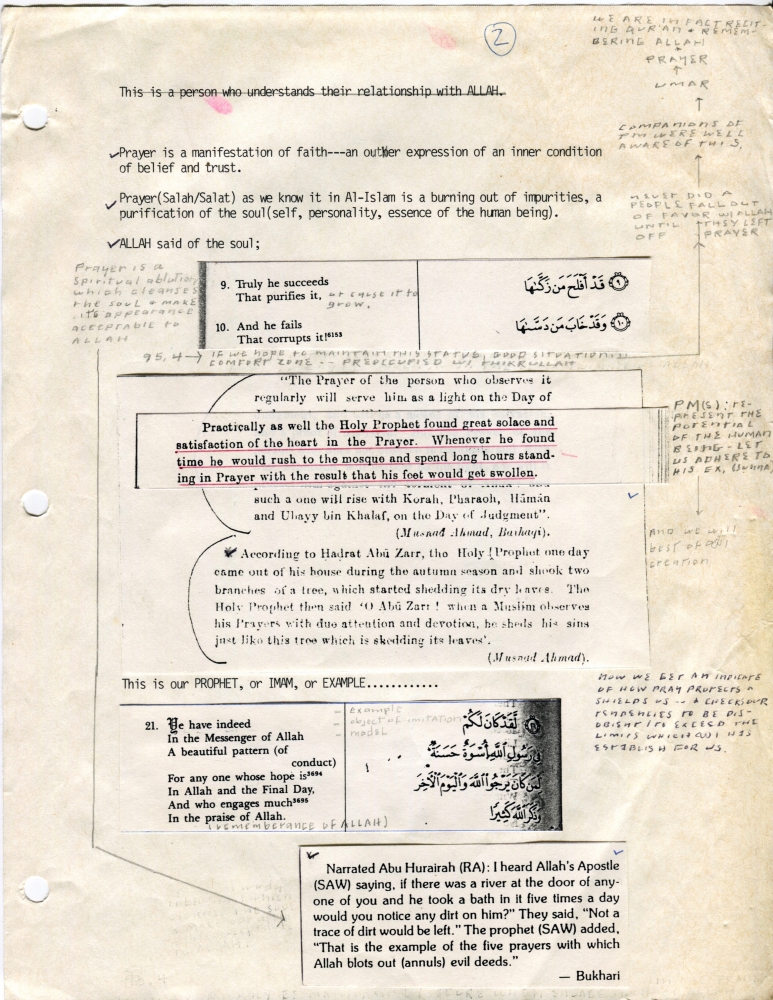 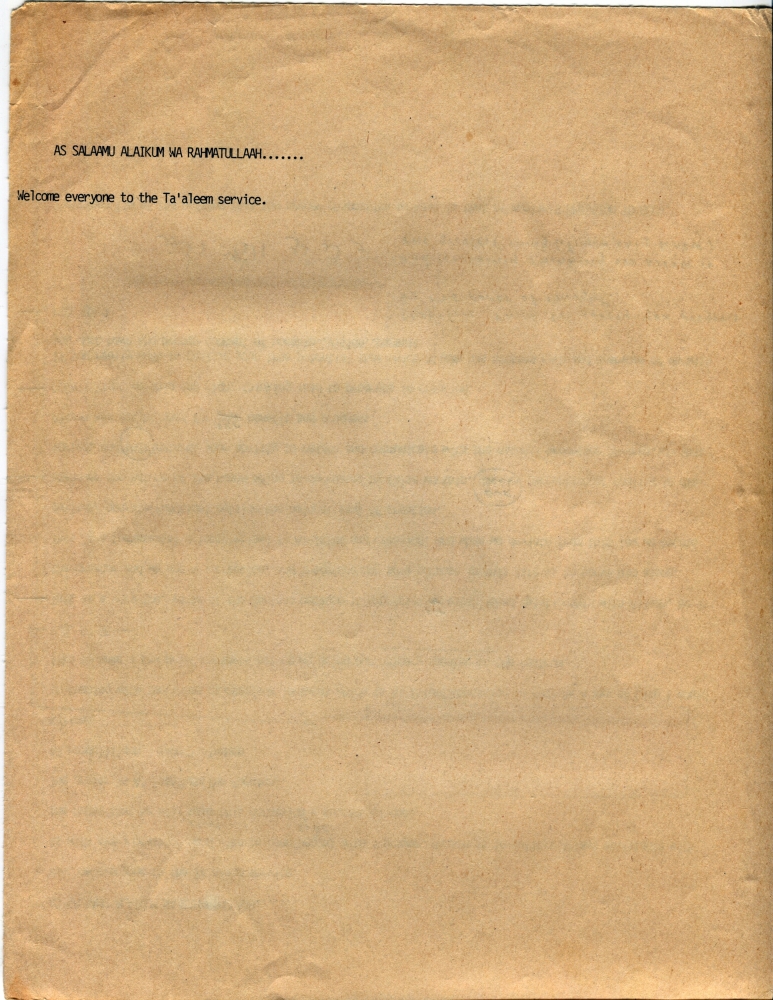 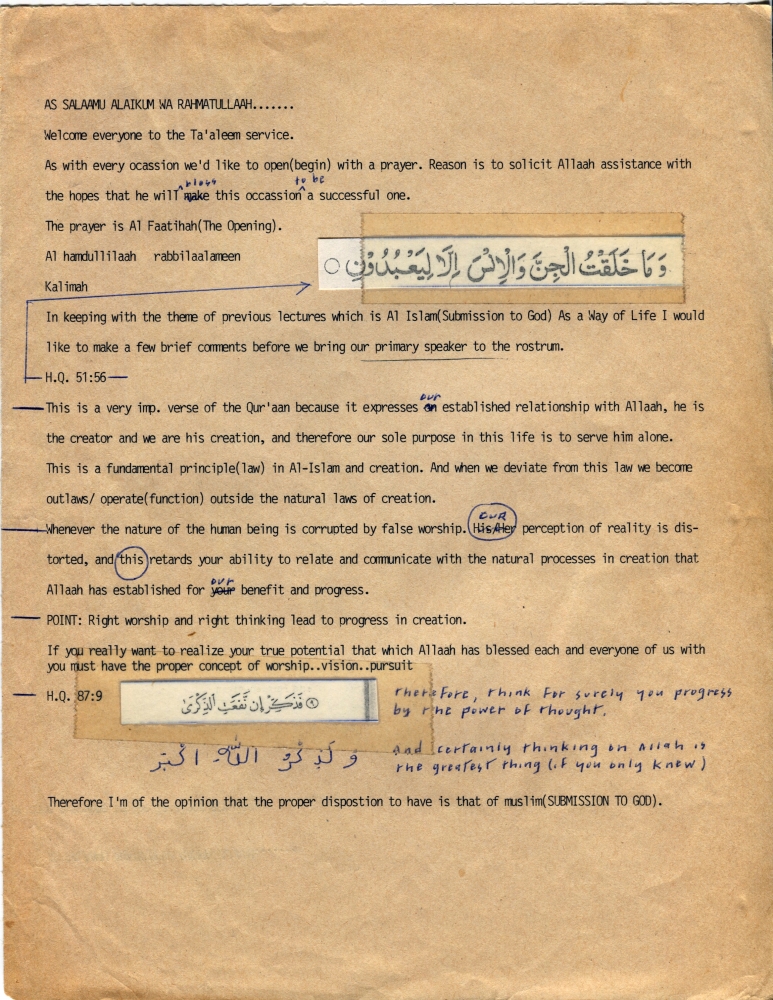 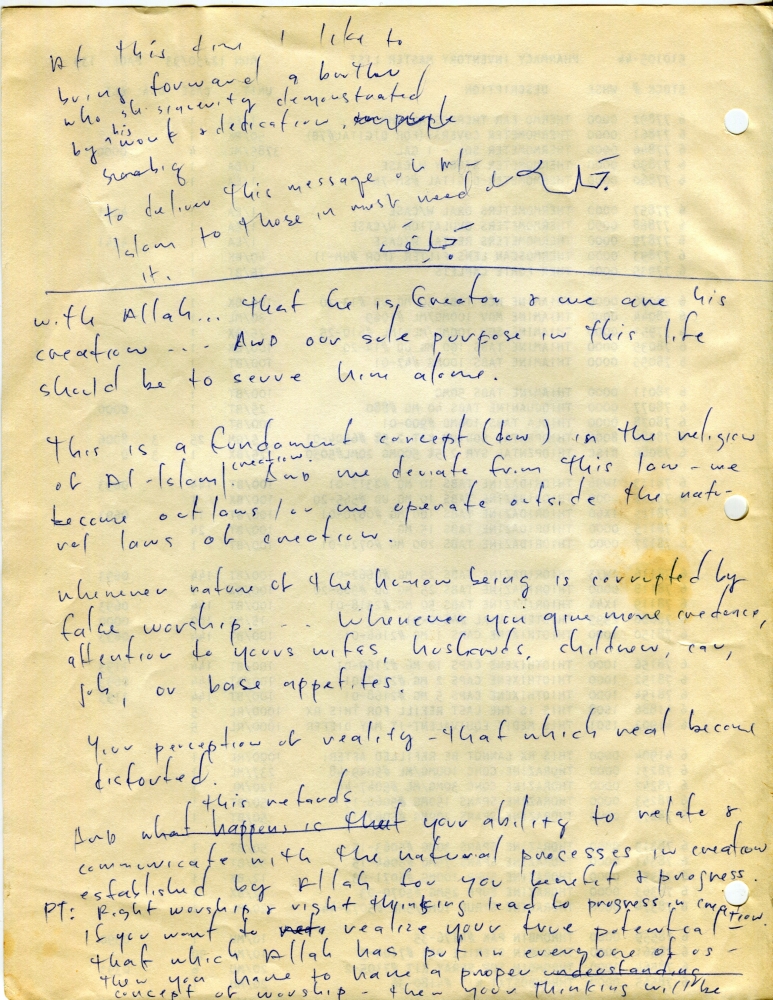 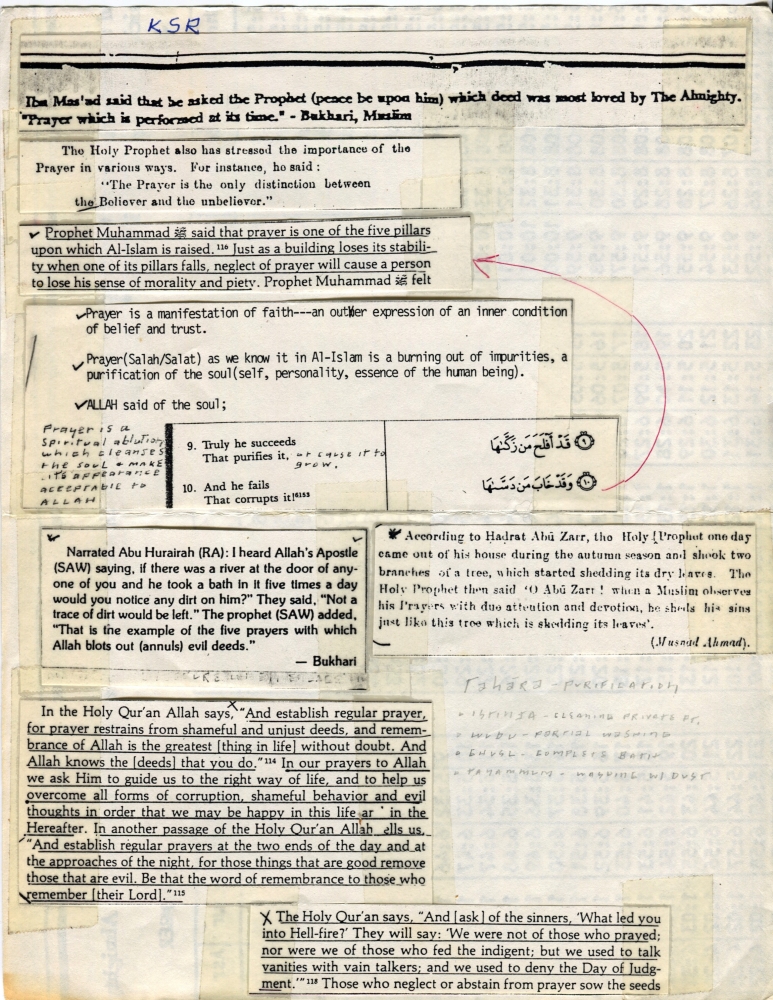 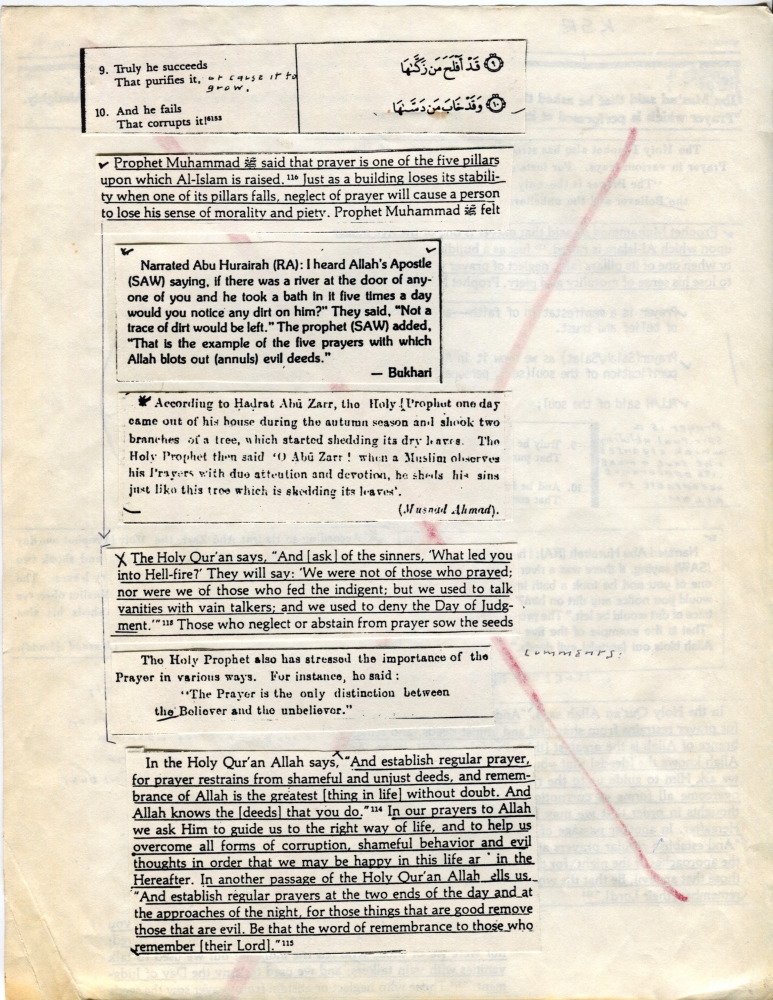 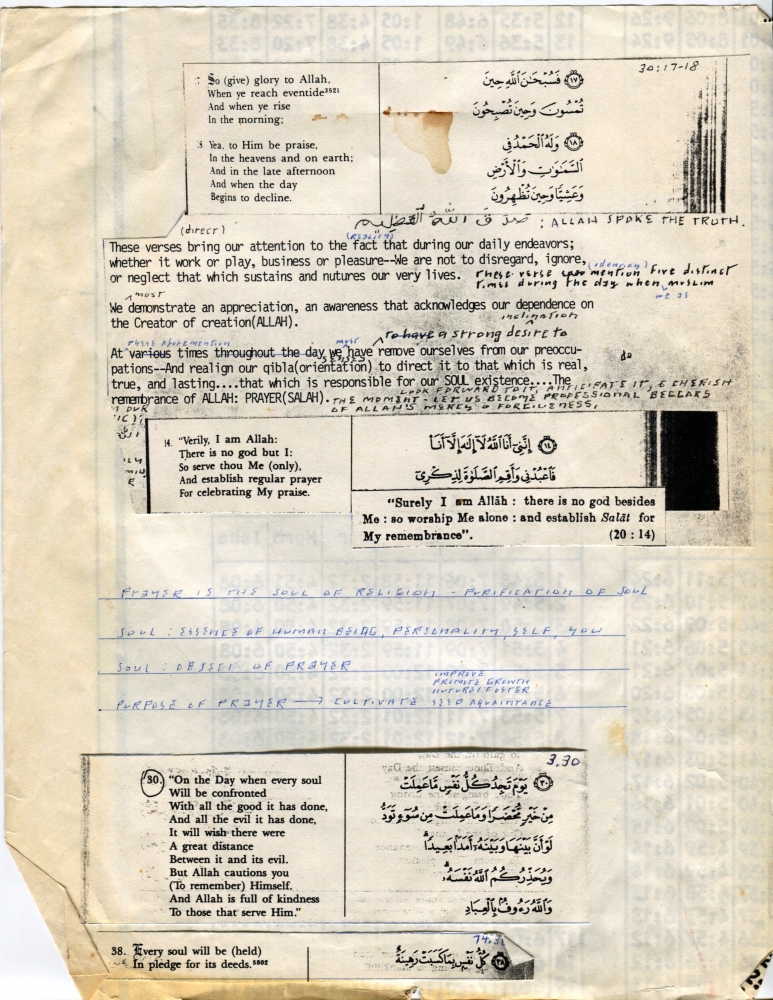 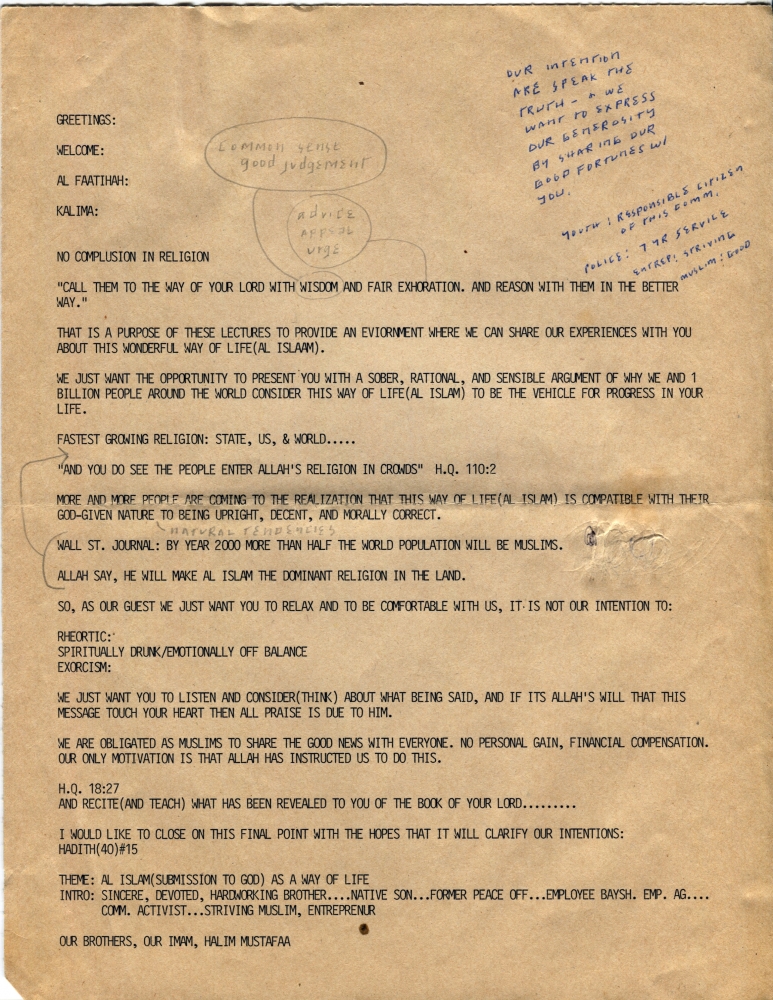 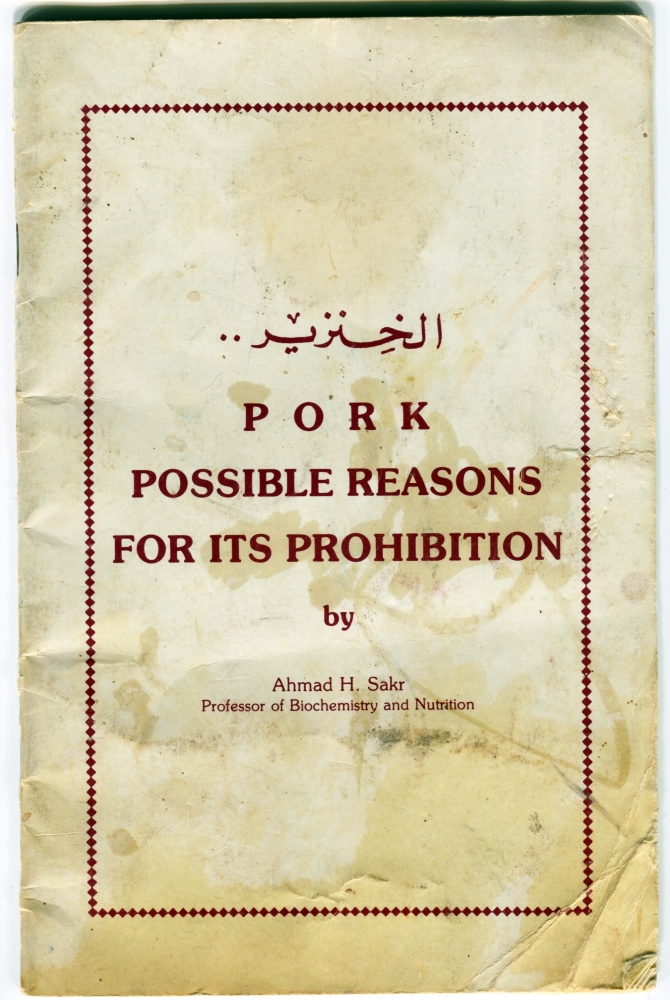 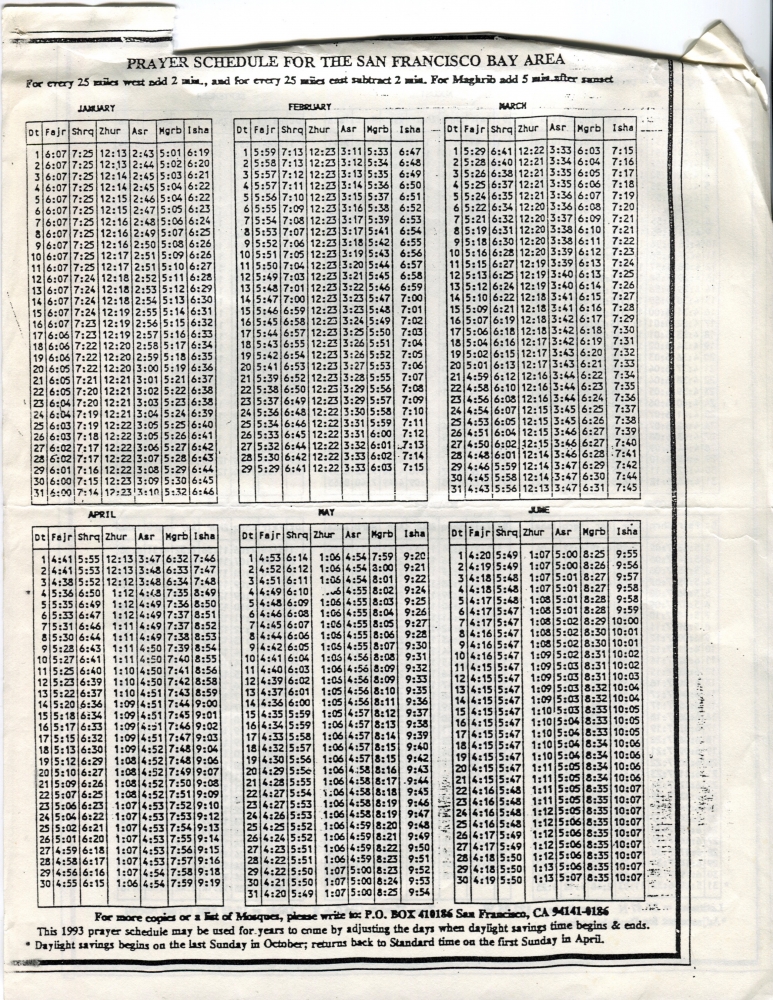 In addition to my father's archive, someone shared a KTVU special on the masjid where my father converted in 1982. You can view the video below.

Description from Bay Area Film Archive: "A KTVU Montage program from July 18th 1977 in which producer Johnny Barnes Selvin looks at the lives of Bay Area Muslims, featuring local media's first ever access to Mosque #77 in Oakland. Includes scenes of: Muslims being searched before attending the Friday Juma Prayer meeting at Mosque #77; Imam Muhammad Abdullah discussing his background and the philosophy of the late Honorable Elijah Muhammad and his son the Honorable Wallace D. Muhammad; Fakeem Shuaibe and Yolanda Shuaibe sharing their experience of living as Muslims since 1972; a visit to Your Black Muslim Bakery and interviews with owner Yusuf Bey and employees Shamsun Bey and Muhammad Saleem; the wedding ceremony of Charles and Cheryl Fareed at Mosque #77 and reflections on how the teachings of the Honorable Wallace D. Muhammad are leading American Muslims in a new direction, encouraging more active involvement in U.S. society. Executive Producer on this program was Ian Zellick. Opening graphic designed by Carrie Hawks."

This video led me to a host of other videos documenting the Warithdeen Muhammad Community in Oakland, CA uploaded by user waajidsvideo found here. You can see a screenshot of the video gallery below. 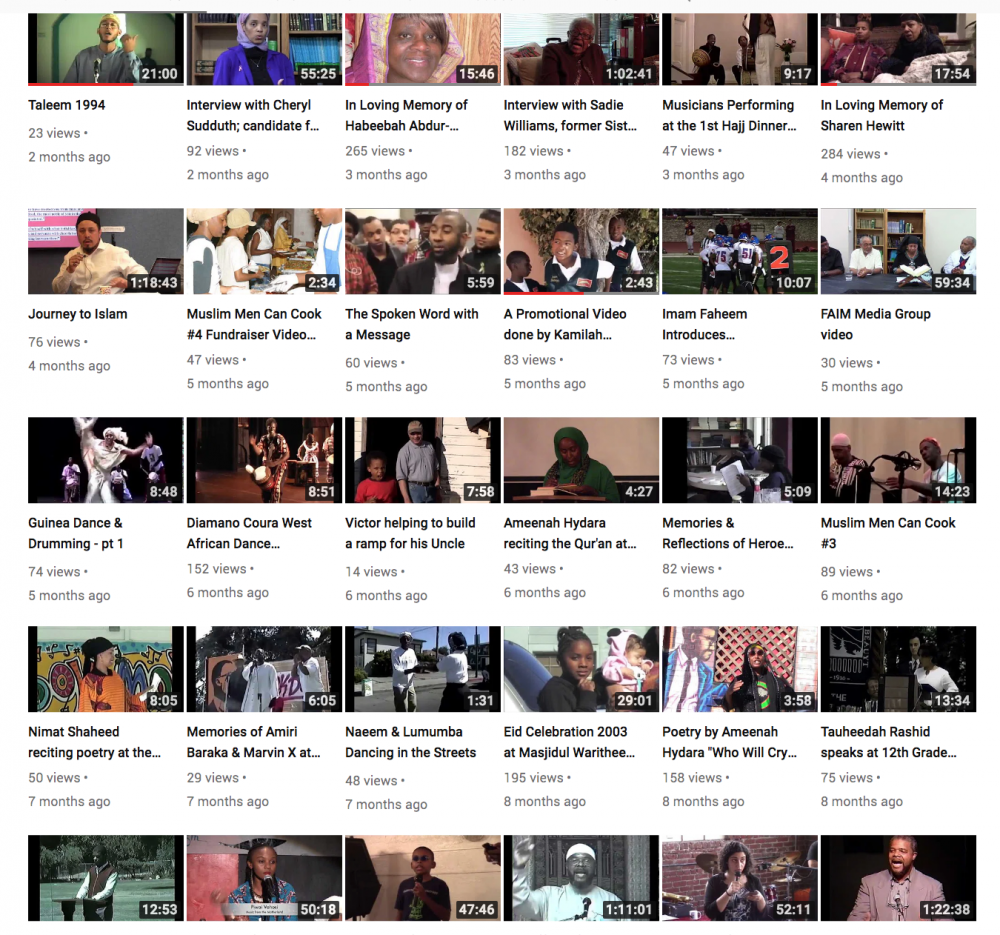 The fun part of this archive rabbit hole is stumbling onto other ephemera that helps to flesh out a clearer story about my father and his spiritual journey. Several months ago, I came across a set of Bilalian News being auctioned on eBay. After some haggling, I was able to purchase ten issues of the periodical. Bilalian News was originally named Muhammad Speaks when the Nation of Islam was under the leadership of Elijah Muhammad. In 1976 when Elijah Muhammad's son Warith Deen Muhammad became the successor, he renamed the newspaper Bilalian News.  In the November 14, 1975 edition of Bilalian News, Warith Deen Muhammad explains the name "Bilalian" on page 24. You can view that excerpt below which explains the origins of the name "Bilalian." 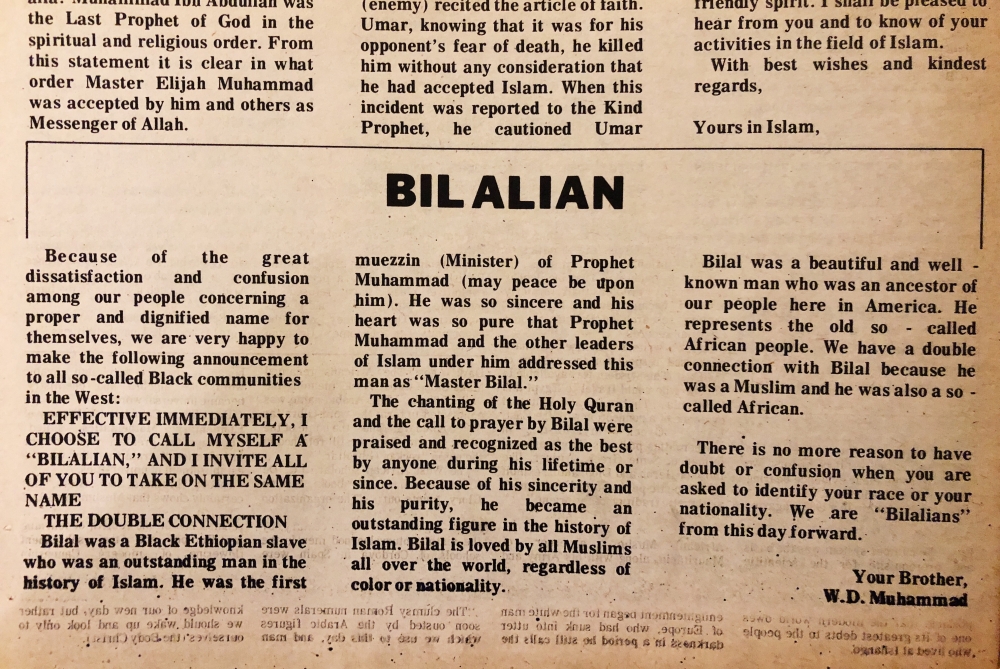 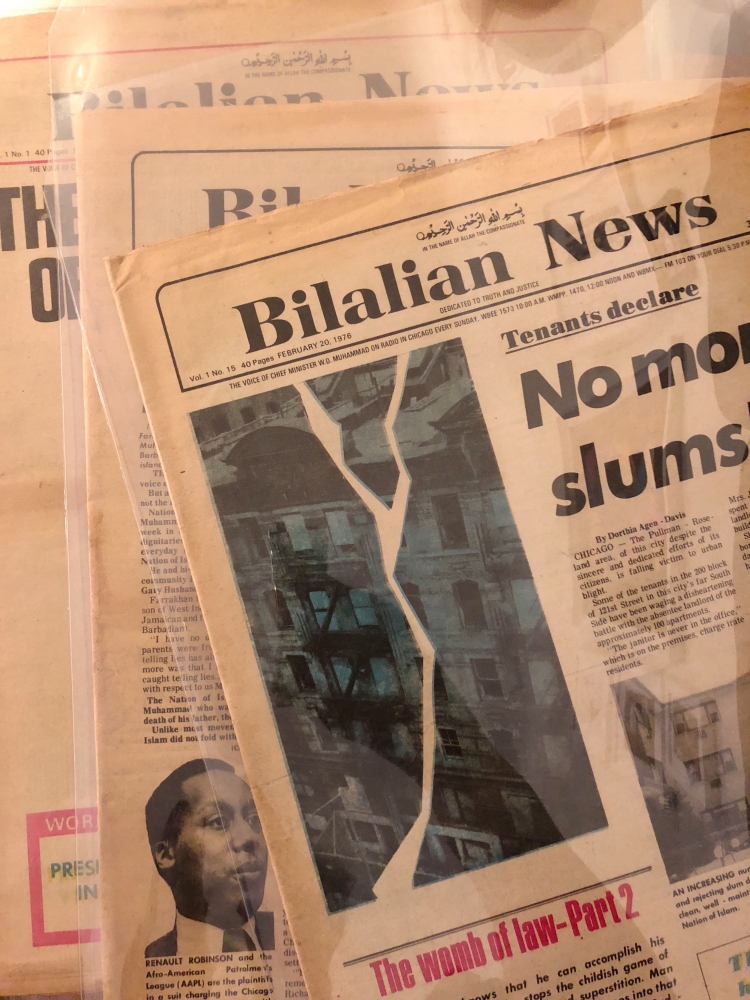 Around 1981, Bilalian News was renamed, settling into the final name Muslim Journal which is still circulated today. Below, you can view an image my father took of one of his friends from Masjidul Warithdeen selling Muslim Journals. 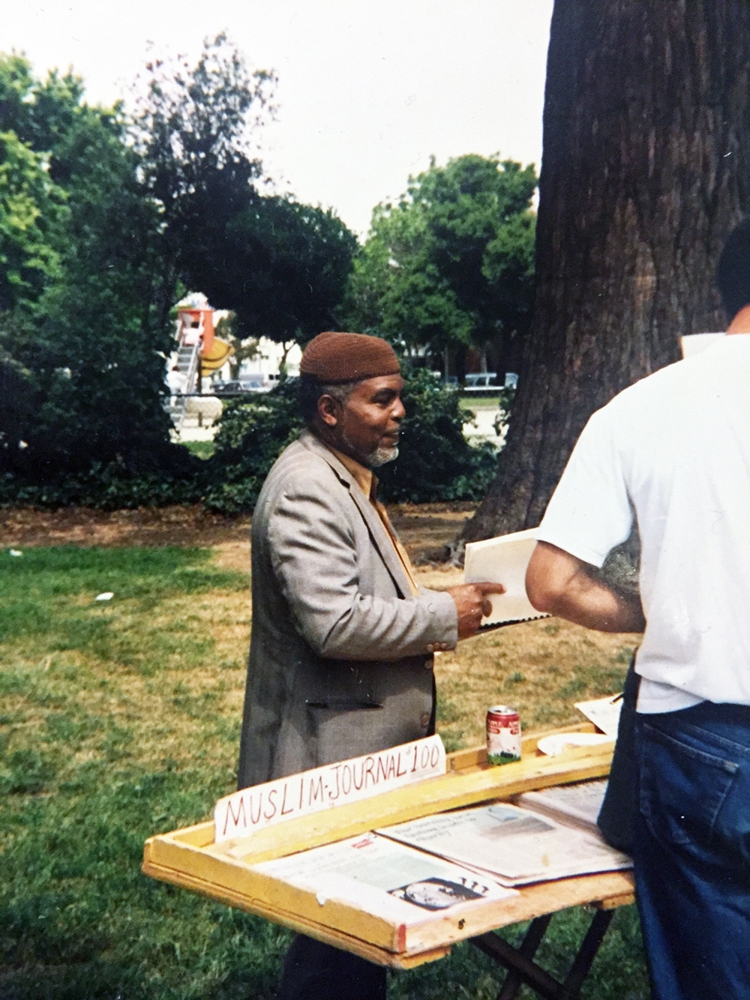 Looking forward to sharing more as this archive grows!